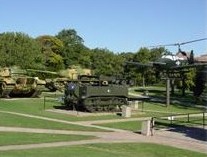 The Thunderbird Park is situated on 15 beautiful acres surrounding the museum complex. Included in the park are more than 60 different types of equipment, including wheeled vehicles, full track vehicles, tanks, aircraft, and large guns. Well landscaped walkways are lined with beautiful trees, shrubs, and bushes. These pathways aid visitors in exploring the park where all equipment and vehicles are identified by plaques. 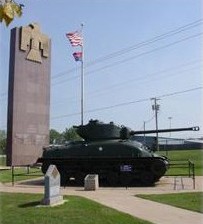 The park is a wonderful place to spend an afternoon, especially on one of Oklahoma City’s beautiful sunny days. A small picnic area with two tables is available on a first come first serve basis.

The 45th Infantry Division Museum is the Nations largest State operated Military History Museum. Oklahoma City is located near the geographic center of the country and is home to the Oklahoma City National Memorial and Museum. This is a beautiful city and an outstanding location for the Afghanistan & Iraq Freedom Reigns Memorial.

“This letter is to confirm our intent that the Oklahoma National Guard will host the Global War on Terrorism Memorial here in Oklahoma City, Oklahoma.”

The District of Columbia was not a candidate due to the 1986 Commemorative Works Act. Following are several provisions of that act.

“All memorials in areas administered by the National Park Service and the General Services Administration must be authorized by Congress.

Memorial sites and design must be approved by NCPC, the Commission of Fine Arts, and either the Secretary of the Interior, in the case of National Park Service land, or the Administrator of the General Services, in the case of GSA land.

The National Capital Memorial Commission advises the Secretary of the Interior and the Administrator of General Services on policies regarding commemorative works. The NCPC Chairman is an ex-officio member of this Commission.

An event or individual cannot be memorialized prior to the twenty-fifth anniversary of the event or the death of the individual.

Note: We recently learned that the time frame for wars has now been reduced to ten years after the end of the event.

How long will it take to complete this memorial? That I cannot predict. Once the funds are in place we estimate the time for construction to be 18-24 months. As mentioned on The Memorial page, this is a living memorial. If it’s completed before the wars are declared over, new tributes will be added each year honoring those lost and wounded.

Congress established a commission to create a memorial to Roosevelt in 1955. The memorial was opened in 1997 – forty two years later. The National WWII Memorial was dedicated on May 29, 2004 – fifty nine years after the war ended. Funding and construction took eleven years. A group of Vietnam veterans led by Jan C. Scruggs moved from incorporation to dedication of the Vietnam Veterans Memorial in 3 years and 7 months. That was very impressive. However, it was almost ten years after the war ended before the memorial was dedicated. This group still did a wonderful job considering the hostility service personnel faced after that war. The Air Force Memorial took fourteen years to complete after the foundation was incorporated.