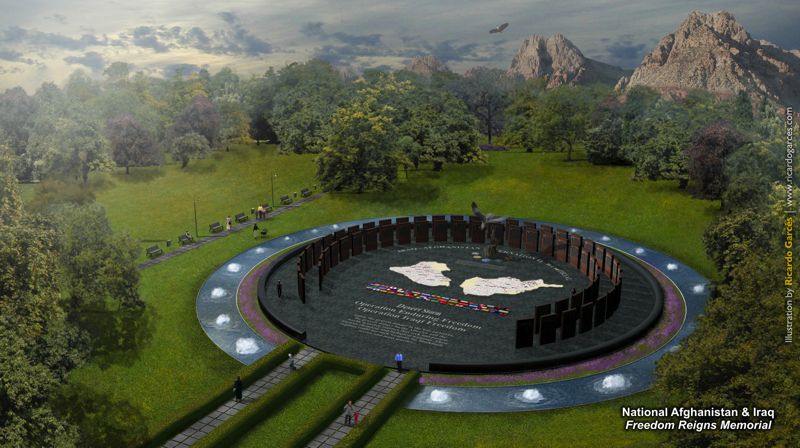 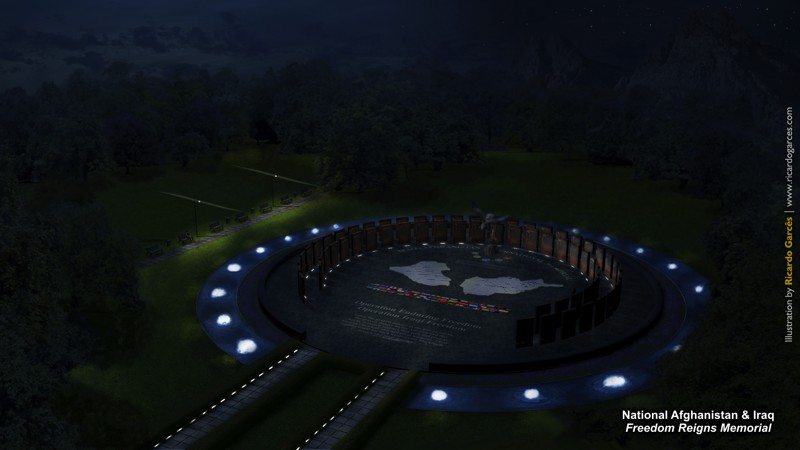 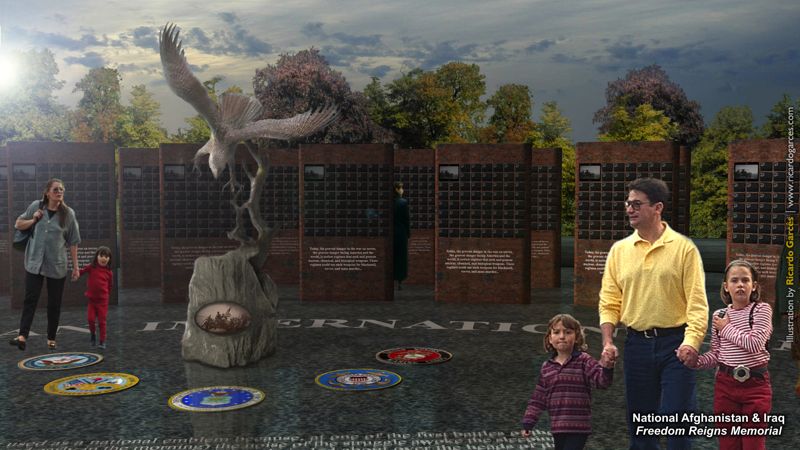 Update: The memorial is now simply called the Freedom Reigns Memorial. When the memorial was first envisioned there were just the two major theaters of war. That has since changed.

The artist’s rendition of the National Afghanistan & Iraq Freedom Reigns Memorial as it might be seen in a mountainous setting. This rendition was completed before a site location was chosen. That location is tentatively Thunderbird Park at the 45th Infantry Division Museum in Oklahoma City, OK. Other sites will be considered.

Freedom Memorials has designed an unparalleled National Memorial that will personally honor each man and woman who paid the ultimate price for freedom. This memorial will confirm for every family across the US and around the world that America does care and will never forget their sacrifices. We need to honor those brave men and women today!

We have been working tirelessly on this endeavor for eleven eight years to honor these heroes with a timeless, distinctive memorial. One that features individual black surgical stainless steel tributes that will tell their stories for thousands of years. 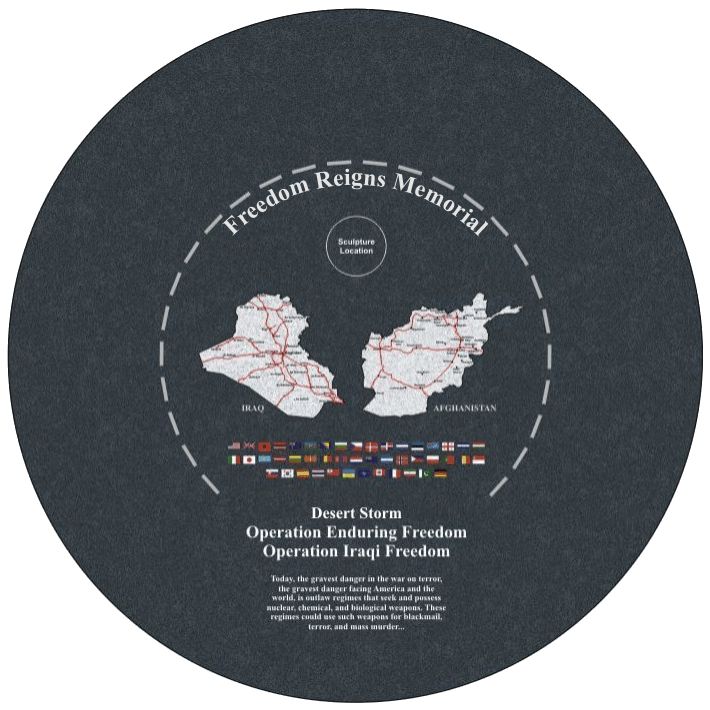 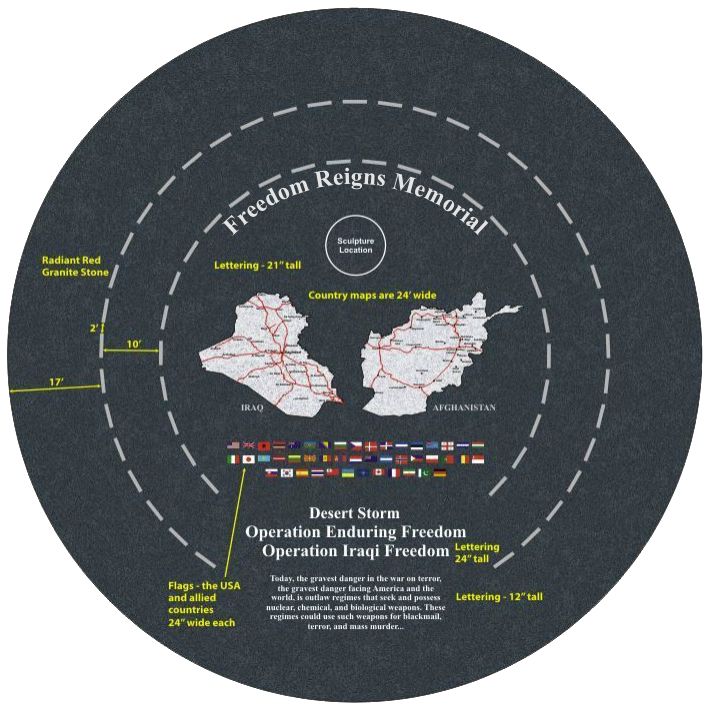 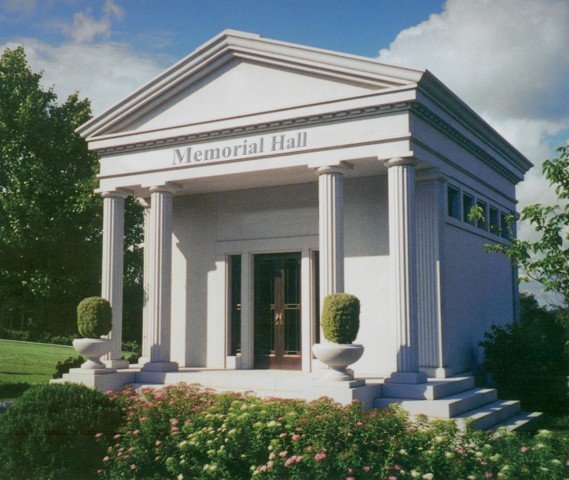 Layout 1 (click to enlarge) shows the first semi-circle of radiant red, granite stones. There are 3,120 tribute spaces available. A second row (layout 2) adds 4,440 tribute spaces, and a third row, not shown, adds another 6,240 spaces. We hope and pray we do not lose 13,800 distinguished military personnel before these wars are over. But we do have an expansion contingency if that becomes the case. Every fallen and wounded hero will be remembered. A Memorial Hall will be an addition to the memorial. Displays will feature donor tributes, photographs, guest books, and donated memorabilia. The building will be constructed of granite and will withstand the test of time. It will be situated close to the memorial itself.

Update: Additions and/or modifications in floor inscriptions will be made as identification of new theaters in the war on terrorism are identified.

This will be a ‘living memorial’. Each year, after the initial dedication, fallen heroes and wounded will be added until the theaters in the wars on terrorism have been declared over. We don’t feel it’s necessary to wait until these wars are over before we honor those who have made the ultimate sacrifice for freedom. In many cases memorials to our military and public safety personnel have taken decades to put in place, ie. the World War II Memorial. Why wait years to honor these heroes. They are making sacrifices today! Jan Scruggs, who conceived and raised the funds for the Vietnam Veterans Memorial, said in a March 25, 2007 Parade Magazine article, “Soldiers need supplies, medical care and compensation, but they also need to know we appreciate their sacrifice. The memorial remembers those who put everything on the line for the nation.” We believe the men and women who made the same sacrifice today deserve the same appreciation.

The imaging technology that will be used in this memorial is unique. High resolution images are etched into black surgical stainless steel. These tributes can withstand the elements for thousands of years. If you would like to read more technical information about these tributes please click here. At right is a rendition of how a section of Radiant Red granite will look that features the names of the wounded on 8″ x 10″ tributes.

The following is quoted from the once present Faces of the Fallen Website.

“Faces of the Fallen is an exhibit of more than 1,300 individual portraits honoring America’s service men and women who died in Afghanistan and Iraq during the period October 2001 to November 11, 2004. It has been on view at the Women In Military Service For America Memorial at Arlington National Cemetery since March 2005. Talented artists from across the country have donated these works as their gift to a grateful nation and ultimately to the families themselves.

This unique tribute has been conceived and organized by private individuals and funded entirely with private donations. It reflects the desire, expressed in many communities and cities across the country, to honor these brave men and women.”

“To say that this exhibition is moving would be an understatement. Words always fall short when we try to describe our respect, sympathy and profound gratitude to those who have sacrificed everything in the service to our nation. . . The artists have succeeded where our words have failed.”

We want people to see more than names and dates when they visit this memorial. This etching technique makes available the ability to remember faces in high resolution on materials that will survive the outdoor elements for thousands of years.

These special tributes make this memorial the first of its kind in the world. The designers determined that the first use of these special tributes on a national monument should honor our military and public service heroes. And not only heroes from the US military, but heroes representing our coalition forces as well. This will truly be an International Memorial.

We are extremely grateful to Mr. Ricardo Garcês for his exquisite memorial renditions. We invite you to visit his Website to see more of his outstanding work.