Preface: Please do not misconstrue this post or any of my others to be negative. I, along with my colleagues, have been working tirelessly on this project for eight years with the explicit vision to make this memorial the finest and most distinctive in the world. I simply want to honestly share with you some of the realities that make this endeavor, at times, frustrating. Senator Bob Dole intimated in his 2006 letter to me that this would be a most arduous task. At that time, I could not fully appreciate his counsel. Today, I do. 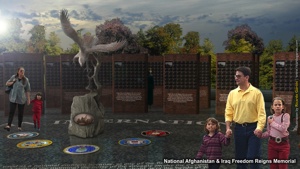 The following quote is from the book Drift: The Unmooring of American Military Power by Rachael Maddow.

“While America has been fighting two of its longest ever boots-on-the-ground wars in the decade following 9/11, and fighting them simultaneously, less than one percent of the adult US population has been called upon to strap on those boots. ‘Not since the peace time years between World War I and World War II,’ according to a 2011 Pew Research Center study, ‘has a smaller share of Americans served in the armed forces.’ Half of the American public says it has not been even marginally affected by ten years of constant war. We’ve never in our long history been further from the ideal of the citizen-soldier, from the idea that America would find it impossible to go to war without disrupting domestic civilian life.”

Senator Joe Lieberman made this insightful comment on March 22, 2007.

“Our military is fully engaged in this war, but most of the rest of America is not. Five years after September 11, very little has been asked of the American people. Instead of mobilizing as a nation, the burden of this war has fallen disproportionately on the few… on our soldiers, our brave men and women in uniform. They are the ones who have put their lives on the line so that freedom may prevail. In this chamber, and across our land, there have been great differences of opinion about how we should pursue the war in Iraq, but there has been great unity of opinion that our troops there should be honored. We must support them.”

Larry Diamond of Stanford’s Hoover Institution said, “America is not at war. The US Army is at war. The rest of us are just watching, or just ignoring, while the whole fight is carried on by 150,000 soldiers and their families.”

I am not saying that the people of this great nation are not honoring our military men and women. Most people will say they respect and admire our troops. However, almost all non-profit organizations are concentrating their efforts on the returning troops and their families. We must honor every fallen hero to express respect and gratitude to their families and loved ones – just as we did for our heroes of wars past. However, as was the case with the World War II Memorial, we should not wait fifty-nine years to do it.

I visited the Community Support for our Military page on the OurMilitary.mil website. It featured twenty-four separate categories populated by 145 non-profit organizations. All of them offered help to the living but none proposed a memorial to the fallen.

When the AmericaSupportsYou.mil website, the predecessor to OurMilitary.mil, was still active in 2008, we applied for addition to their non-profit list. Here is the response we received after submitting our application.

Over the years, I have spoken to hundreds of people about this memorial. Virtually everyone I’ve spoken to cannot believe the obstacles we’ve encountered. We have tried for years to contact celebrities who demonstrate support for our military. We can get no further than their handlers. One good example is Toby Keith, the famous country singer. He has given a concert at an outdoor pavilion in Raleigh the past two years. I called his management firm in Nashville the last time he was here and asked if I might be able to speak with Mr. Keith about the memorial after his concert. The representative responded, “Under no circumstances will we permit you to meet with Mr. Keith.”

We get virtually the same response from ‘executive assistants’ employed by corporations and influential business leaders. Some of those stories are startling. What about the media? Even our local newspaper would not consider a story. A journalist for the paper told me his editor said, “There is no story here.” I spoke to a reporter who works for our local CBS affiliate. She told me they were only interested in sensationalism. She remarked, “We might do a story after the memorial is built.”

I have contacted newspaper reporters across the country in an attempt to get a story written about the memorial. I have had no success. I assume it is just not newsworthy or they don’t think the effort is genuine.

Many have told us we were just one person away from building the momentum needed to move this project forward. We have yet to meet that person. We are painfully aware that we need the help of an influential public figure, celebrity, or business leader who sincerely feels we need a National Memorial honoring our fallen warriors.

A marketing expert in New York told me that in today’s world you have no credibility until you have appeared on TV. That may have been a bit of an exaggeration, but do you remember the ‘Balloon Boy’. Meaningless sensationalism picked up by the media while a National Memorial to our fallen heroes goes nowhere. The marketing expert may have been right.

We have pursued the Internet’s social media scenario, but the memorial is not sensational enough to create any buzz. Our website has been active for over six years, but we still get very little traffic. Few web surfers search for a memorial. Is that an indicator of how people feel? I don’t think so. People will not search for a memorial unless it has a specific meaning for them. Without media involvement, there is no awareness.

I set up a booth at several local street fairs in an attempt to determine if the average, small town citizen would make a donation for the memorial. When presented with the opportunity, the means, and the information, people made donations throughout the day. Kids would come up and drop quarters in the jar. People do care! They just don’t know the project exists. Unfortunately, the street fair methodology, unless it was carried out throughout the country, will not raise the funds necessary to complete this project.

There are philanthropic billionaires who are now giving away portions of their vast fortunes. Would one consider supporting this memorial? There are celebrities, business leaders, and influential public figures who vocally and financially support our active military personnel and veterans. Would one like to help us produce a national fundraising event to raise awareness and funds for this memorial? Can someone help with media coverage or contacts? Have any of these potential supporters heard about this project?

I highly commend all the organizations that are doing so much for the men and women who have been traumatized by these wars, many of them enduring devastating injuries while fighting for our freedom. They, and their families, deserve all the support they can get. Cities across the US have erected small, local memorials honoring their Afghanistan and Iraq fallen.

We have designed an unparalleled National Memorial that will personally honor each man and woman who paid the ultimate price for freedom. This memorial will confirm for every family across the US and around the world that America does care and will never forget their sacrifices. We need to honor those brave men and women today!

I respectfully thank all of our military men and women, past and present, who have sacrificed so much for this great nation. Without your dedication, freedom would be just another word.