Crowdfunding and the Memorial 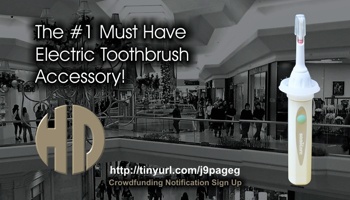 Previously I have written about a new product I designed called the HandleDry, a silicone accessory for an electric toothbrush that stops the foam from running down the handle. 100% of the proceeds form future sales of this product will be used to promote and ultimately construct the Freedom Reigns Memorial.

At present, I am working on building a mailing list of people who show an interest in the product. This endeavor seems like it should be straight forward, but it’s more difficult than you might think. I have several landing pages. I post on Facebook and Twitter. Most recently I tried to boost a Facebook post. I wanted to test a $10, single day boost. The post reached 369 people. Post engagement was 26. We got 2 page likes and no sign ups on our crowdfunding mailing list. When I set up the boost, I used crowdfunding, crowd sourcing, electric toothbrush, and toothbrush as key words directed at US individuals. That $10 gave me some insight, but that’s about it. We just don’t have the money to throw at advertising in hopes for a successful outcome. That could get very expensive with the distinct possibility of no return.

We have gotten very nice reviews from users of the product. I hoped the testimonials on the landing page or the use of proceeds would motivate people to sign up. Apparently neither reason was motivating enough. I have done market research and statistical analysis before. Admittedly, the sampling was small, but we should have gotten a few additions to the list.

I have read a lot about crowdfunding lately. The most successful campaigns are those done by companies who already have a large following. Other successful campaigns had celebrity help. If you read my other posts regarding celebrity contacts, you know how far we got with that. Gatekeepers stopped us at every attempted contact. Since we do not have a mailing list, the chances of success if we launched a crowdfunding campaign are virtually nil.

I’m a big fan of Shark Tank. I have tried to reach each of the sharks directly without success. I tried to reach Lori Greiner for two years in multiple ways. Nothing worked. Sales of the HandleDry would run very similar to the Readerest, a product in which Lori Greiner invested and brought her QVC talents. The fellow who invented the Readerest was able to initially manufacture his item and get some sales before being selected to appear on Shark Tank. Unfortunately, I am not in that position. The HandleDry needs an injection mold, packaging, etc. before it can be sold. I make the testing prototypes in my lab. But each prototype has a long cure time, and the small quantity of silicone I purchase make the prototypes way too expensive to sell. That’s why the move in the crowdfunding direction. It is an effort to get the start up funding for production. Then the product could be offered for sale.

The statistics from the post boost have me rethinking the crowdfunding campaign. If I cannot build a suitable mailing list, proceeding may be futile. I am going to try some modifications to one of the landing pages. I am, by no means, a social media expert. If any of you have ideas on the subject of building a mailing list, please get in touch.

“With utilitarian products such as the HandleDry, it can be difficult to garner the press a new flashy product might. While I think this would do great in retail stores, it might be difficult to crowdfund.” – Eric Strom / Director of Operations – Crowd Supply